Few educators today would debate the value of differentiation. But given the structure of our school system, meeting individual students’ needs is not always easy. We measure achievement with standardized tests and use textbooks as our primary tool for instruction: not exactly a recipe for differentiation. Many teachers feel overwhelmed by the thought of providing unique learning plans for each student. Just 10 years ago, it was nearly impossible to create individual learning plans for each student. Today, technology and differentiation have the potential to transform learning in every school.

Differentiation is often thought of as a way to support all students in mastering the same content. While this is a noble goal, it is not always realistic or beneficial. Some schools even mandate the daily pacing guides teachers and students are to follow. Teachers may be asked to “scaffold” students who are behind grade level to ensure they can perform. Supporters of this approach will say that all students should be held to the same high standards. While the rhetoric sounds good, the reality is that scaffolding is not a substitute for strong foundations in literacy and numeracy.

Personalized learning allows schools to go beyond the notion that scaffolding can make up for a lack of foundational skills. When I first introduced my math students to personalized learning, I wanted to provide more feedback while reducing grading time. Only after using Khan Academy for almost a year did I begin to appreciate its potential to dramatically improve students’ enjoyment of and achievement in math.

For all the challenges involved in the roll-out, the initial benefits of blended learning were substantial. Instead of spending hours each week correcting assignments, students were receiving feedback on their work in real-time, with no grading required. They were also able to access hints and videos while completing assignments at home. The data enabled me to understand and target gaps in foundational understanding.  And I could create personalized learning paths for all of my students.

The improvement in achievement and engagement was so stark that I decided to drop the textbook entirely for the coming year. We were rolling out a 1:1 iPad program in my school, which allowed me to shift to using Khan as the backbone of the curriculum.

Ditching the textbook was a big change, and not without its challenges. I started to realize, though, that the content available through Khan Academy offered everything a text offered and more. Some students had begun approaching new problem sets by pressing the ‘hint’ button again and again until they had shown all the hints available – the result looked just like a page out of a textbook – even without videos, students were able to learn new topics without being taught through direct instruction. 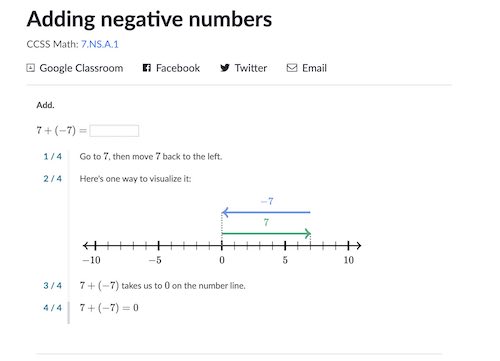 Others preferred to dive right in to new topics by combining prior knowledge and trial-and-error. When I compared the online approach to the textbook, it seemed like the only thing missing was the paper. Using Khan as an in-class teaching tool as opposed to just a homework tool helped me to better understand and support my students. I learned about the unique way each student approached new concepts or practiced old ones. These observations eventually influenced the instructions I gave to incoming students each year, as well as the support I provide to teachers who are new to personalized learning.

By allowing students to make some decisions about what and how they learned, I’d taken my first step toward facilitative teaching. It no longer made sense to serve as “sage-on-the-stage” if students were studying different topics. I had to reconsider my role in the classroom. The amazing thing was how quickly students stepped-up to fulfill roles I had previously taken on.

Not only did I move away from the role of information-provider, I also found myself doing a lot less nagging. Instead, since students had increased their ownership, they were more motivated and self-directed. My role was to help them set goals and coach them through difficulties. While I had stepped back from some traditional roles, I noticed many students still needed guidance on mindset and organization.

The first issue that jumped out was that many were not writing out their steps when solving problems. Khan has a built in ‘scratchpad’ feature, but it’s just not the same as writing on paper; aside from the fact that it is hard to write legibly with a finger, the work disappears when a student moves to the next problem. When a student had difficulty, there was no way for me to find out where they’d gone wrong. More importantly, they often couldn’t read their own writing or retrace their steps.

Reminding students to write out their work did not have enough of an impact, so I began including written work as part of their grade. I still let them decide whether a given problem could be done in their head, but they needed to at least list the problem sets they had completed and the time spent on each one. I provided each student with a graph paper math journal and checked their entries periodically.

Making a smooth transition to personalized learning, though, took more than just having students keep journal entries. I was fortunate to have a principal who was supportive of technology and innovation, but these new methods raised concerns for parents and some administrators. I hadn’t appreciated that even in New York City, many people were unfamiliar and even fearful of education technology. One parent complained that her child ‘couldn’t learn from computers.’ Another thought I put my feet on the desk and drank coffee while students stared at computer screens. (He may have been right about the coffee…) Others were so accustomed to a purely content coverage approach that the idea of students learning different topics at different times just didn’t make sense.

Fortunately, as time went on, the benefits of the program became clearer to more of the community at-large.  Struggling students were able to move quickly through remedial content, and advanced students were challenged in a way they had not been before. When test scores came back showing double-digit percentile increases in mean and median scores, I was ecstatic. Families that were most resistant began to come around.

Of 26 students in my class, 13 improved by over 20 percentile points in either reasoning or computation. One student’s reasoning score jumped from the 20th to the 90th percentile. Either I had miraculously become an amazing teacher in one year, or Khan Academy was having a major impact. Though test scores are not the only measure of success, this was one more way to show that the risk was paying off.

Eventually, my systems evolved both to improve the quality of instruction and to better communicate the value add to all stakeholders. By adding a leveled grouping component, students were better able to learn and problem-solve collaboratively – anyone observing a class could easily see students’ enthusiasm and their engagement with both the content and with their peers. Scheduling class visits for parents and co-workers allowed others to appreciate that technology wasn’t an end in itself but part of a larger process.

I also began posting videos and other resources to help parents understand  how we had integrated Khan into the class. Some parents had felt left-out because they couldn’t look up the day’s lesson in the text and re-teach it to their children at home. I still think it’s unreasonable to expect parents to reteach content at home, but I appreciated their desire to be involved. I showed them how they could monitor their child’s progress and even learn the content themselves.

One Classroom at a Time

After several years of using Khan Academy with my own students, I realized other teachers were interested in personalized learning. I gave several presentations and workshops to share what I’d learned and provide helpful tips. Schools began asking me for workshops and other support to create similar initiatives.

At first, I tried to show teachers how to implement the fully-formed implementation model that I had developed over several years. I soon realized that walking teachers through each step I’d taken over several years could be confusing and a bit boring. Eventually, I developed the Three-Bridges Design for Learning to help schools integrate personalized learning into their existing curriculum.

I’ve had the opportunity to share these personalized learning strategies with thousands of teachers across hundreds of schools. At first, I wondered how well the systems I developed would translate to different schools, with different students, teachers, and software. But so far, the results have been astounding.

I’ve even found that these same systems to be effective with any number of adaptive learning platforms, besides Khan Academy, such as IXL, i-Ready, and more!

If your schools would benefit from guidance on implementing personalized learning, we’re here to help.  Contact us with your questions, or schedule a free consultation. 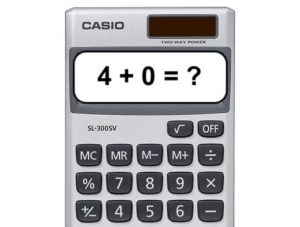 Should Calculators Be Allowed in Math Class?

Do they improve the classroom experience or interfere with learning? Here’s how to decide if calculators should be allowed in your math class. 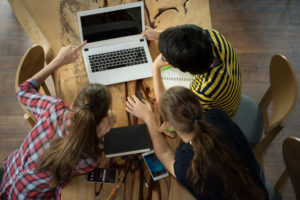 Project-Based Math: A Story of Inquiry and Collaboration

See the animated visual models my students made, and follow in my footsteps as I plan and facilitate a project-based math unit. 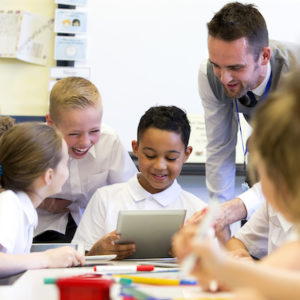 The 6 Signs of a Student-Centered Classroom

Collaboration and active learning are just two signs of a student-centered classroom. How many of these six signs are present in your classroom?